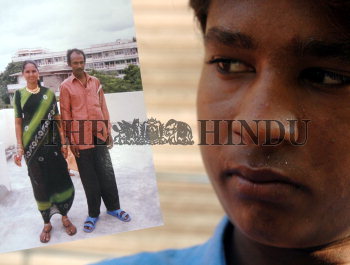 Caption : Asif , the son of the murdered Meher-un- Nisa ( at left , in photograph ) shows the picture taken in good times , with his father Fakhruddin , a watchman at a building in Begumpet , who murdered his mother and fled with her jewellery and cash on October 22, 2006. PHOTO: P_V_Sivakumar .