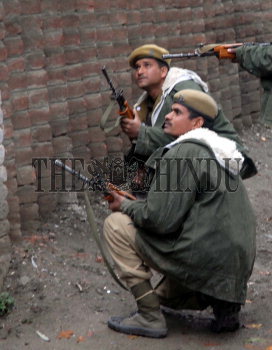 Caption : CRPF soldiers during gunbattle with militants at Shalimar in Srinagar on October 20, 2006. Two foreign militants of Al-Bader tanzeen were killed and two residential houses were damaged in an encounter between militants and para-military force in Srinagar. Photo: Nissar Ahmad