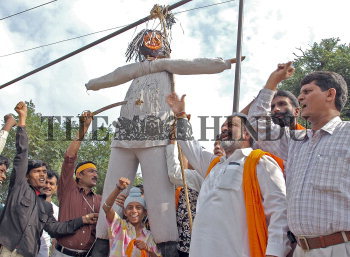 Caption : Vishwa Hindu Parishad activists hanging an effigy of accused in attack on the Parliament Afzal Guru in Chandigarh on October 20, 2006 demanding his execution and rejection of the mercy petition. Photo: Akhilesh Kumar