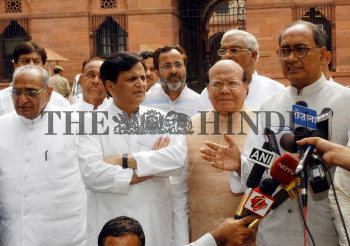 Caption : National level co-operative leaders and Congressmen (from right) Digvijay Singh, S.S. Sisodia, president, National Co-operative Union of India, Ahmed Patel and Motilal Vohra addressing the media in New Delhi, on October 20, 2006, after meeting Prime Minister Manmohan Singh (not in the picture) at his office highlighting the problems faced by banks on account of certain decisions taken by the government. Photo: V.V. Krishnan