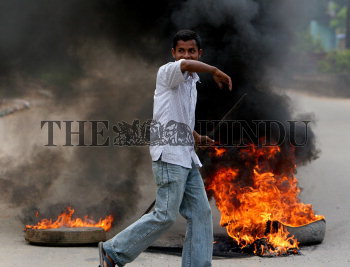 Caption : Members of the People's Committee for Peace Initiatives (PCPI) burning tyres during the ten hours Assam bandh in Guwahati on October 20, 2006. A dawn-to-dusk general strike is called by PCPI in Assam demanding the withdrawal of military operations against the outlawed United Liberation Front of Asom (ULFA) disrupted normal life in the state. Shops and businesses, educational institutions and banks remained closed, while most public and private transport remained off the roads. The People's Committee for Peace Initiatives (PCPI), a civil society group protesting against New Delhi's decision to call off a six-week ceasefire and resume anti-insurgency operations against the ULFA. Photo: Ritu Raj Konwar