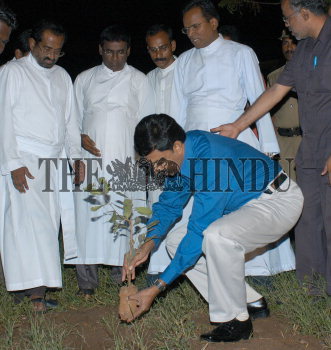 Caption : TIRUCHI: Inspector General of Police, M.S. Jaffar Sait planting the last of the 70,000 sapling in Tiruchi district, as part of the State-wide mass tree plantation programme undertaken by the Isha Foundation under its Project Green Hands at the St.Joseph's College Higher Secondary School grounds in Tiruchi on October 17, 2006. Photo: M. Moorthy