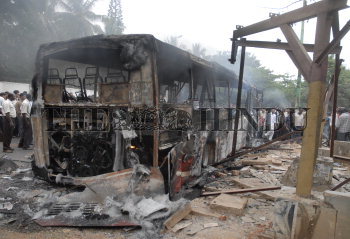 Caption : BANGALORE: The remains of the bus which was set on fire by an angry mob after it knocked down two persons, in Bangalore on October 17, 2006. Two persons were killed on the spot and 27 were injured when a Bangalore Metropolitan Transport Corporation (BMTC) bus, coming from White Field to Shivajinagar, was involved in a series of accidents near the HAL Helicopter Division on Airport Road. Photo: K. Bhagya Prakash