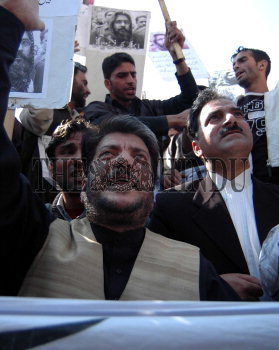 Caption : President People's Democratic Freedom (PDF) Party, Shabir Ahmad Shah along with his supporters in a protest demonstration at Lal Chowk in Srinagar on October 16, 2006. Dozens of PDF supporters were protesting against the death sentence to Mohammed Afzal Guru in the Parliament attack case. Photo: Nissar Ahmad