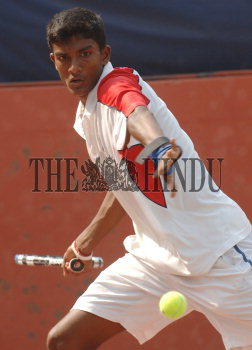 Caption : NEW DELHI: Sriram Balaji about to play a shot against Fariz Mohammad (not in pic) during the boys under-18 final of the DSCL Open tennis championship in New Delhi on October 14, 2006. Photo: V.V. Krishnan