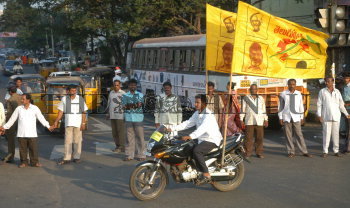 Caption : A Telugu Desam Party (TDP) activist exhibiting his loyalty to the party by displaying its flag during a rasta-roko in Visakhapatnam, on October 13, 2006, demanding the resignation of Andhra Pradesh Chief Minister Y.S. Rajasekhara Reddy in the wake of Supreme Court's verdict on Gouru Venkata Reddy's remission of sentence. Photo: C.V. Subrahmanyam