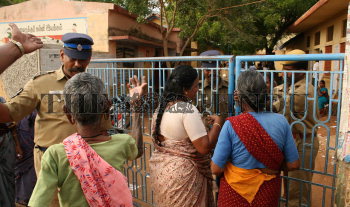 Caption : MADURAI: An old woman trying to pacify a policeman to let her into the polling station after the gates were closed at 5 p.m. Many voters, mostly women, were turned away from the Corporation School at Vandiyur in Madurai on October 13, 2006, as they came late to cast their votes. Photo: S. James