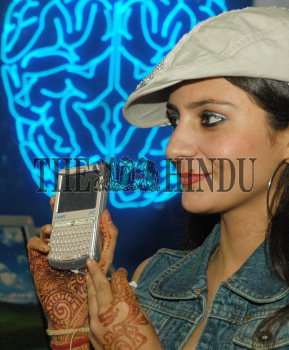 Caption : One of the models displaying the i-mate JAQ, World's first Touch Screen Messaging PDA Phone during its launch at the Mobile Asia 2006 in New Delhi, on October 13, 2006. The i-mate JAQ is a quad-band device that operates on Microsoft Windows Mobile 5.0. Photo: Rajeev Bhatt