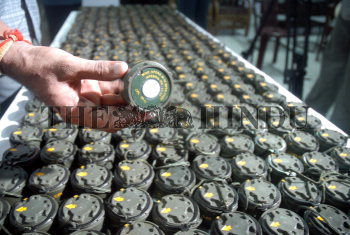 Caption : KOLKATA:The Army Intelligence Unit of Headquarters Eastern Command in Kolkata along with West Bengal state CID and Intelligence Bureau recovered 543 Anti Personnel Mines and many other ammunitions on October 12, 2006 in an operation. The recovery was displayed before media at the Eastern Command Headquarter here. Photo: Sushanta Patronobish