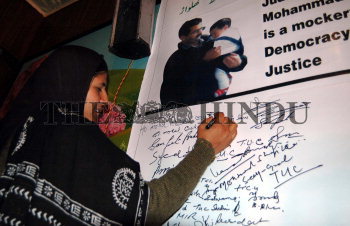 Caption : Tabassum wife of Indian parliament attack convict Mohammad Afzal Guru at the launch of signature campaign in Sringar on October 12, 2006. The signature campaign was organised by Society for the Protection of Detainees and Prisoner's rights(SPDPR) to galvanize public opinion in support of Mohammad Afzal Guru, who has been awarded death penalty in the case. Photo: Nissar Ahmad