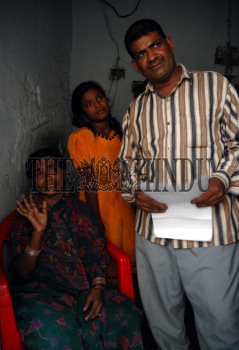 Caption : Surayya Begum and Syed Mustafa the dejected parents of Nazeeya Begum and Shameena Begum narrating tragic marriage of their daughters with two mentally unsound Omaniās recently in Hyderabad on October 11, 2006. The marriages were performed at a house in Santoshnagar on July, 21, the nationals stated that they were Government employees in Oman but the fact was that they were mentally challenged. Photo: Mohammed Yousuf