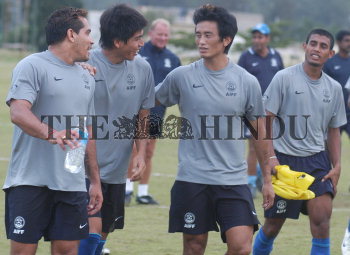 Caption : BANGALORE: India's Bhaichung Bhutia (second from right) seen along with his team members during a practice session at the Kanteerava Stadium in Bangalore on October 10,2006 on the eve of the Asian Cup football qualifying match against Japan. Photo: V. Sreenivasa Murthy