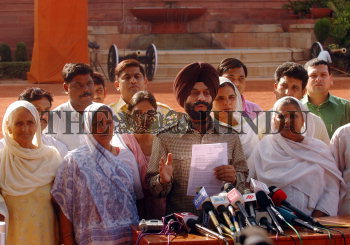 Caption : M.S. Bitta, All India Anti Terrorist Front Chairman along with family members of the Parliament attack victims speaking to the media at Rashtrapati Bhawan in New Delhi, on October 10, 2006, after submitting a memorandum to the President, demanding to uphold the court sentence to Mohammad Afzal Guru, who has been convicted for his involvement in Parliament attack case.. Photo:Sandeep_Saxena