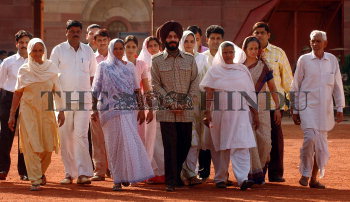 Caption : M.S. Bitta, All India Anti Terrorist Front Chairman along with family members of the Parliament attack victims seen coming out of Rashtrapati Bhawan in New Delhi, on October 10, 2006, after submitting a memorandum to the President, demanding to uphold the court sentence to Mohammad Afzal Guru, who has been convicted for his involvement in Parliament attack case.. Photo:Sandeep_Saxena