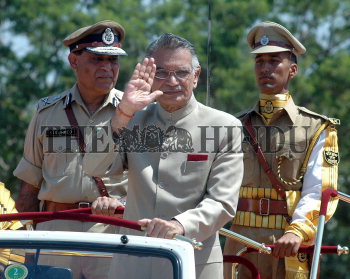 Caption : HYDERABAD: CISF PASSING OUT PARADE --Shivraj Patil , (middle ) the Union Home Minister greets cadets at the passing out parade of the Assistant Commandants and Sub-Inspectors of National Industrial Security Academy in Hyderabad on October 10, 2006. Beside him is S. I. S. Ahmed , Director -General of NISA . Nagendra Sharma , the Parade Commander is at right . Photo: P.V. Sivakumar