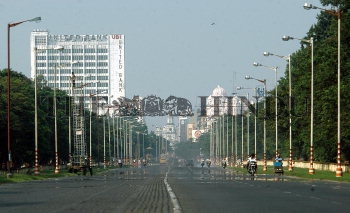 Caption : KOLKATA: Red Road, one of the major roads, leading to the office areas of Kolkata was deserted during the mid hours of October 9, 2006. The Trinamool Congress with a formal support of Congress called for a 12-hour West Bengal bandh today against the September 25 police action on the Trinamool Congress leader Ms. Mamata Bannerjee and her supporters at Singur in Hooghly district while protesting the land acquisition policy of the left ruled government for the proposed Tata Motors project for small cars. Tight security across the city with lesser number of vehicles plying on the roads, the busy metro life was harassed due to the Bandh. Photo: A. Roy Chowdhury