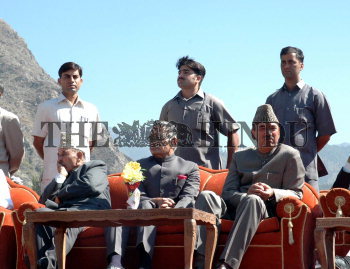 Caption : ( R to L) Jammu and Kashmir Chief Minister Gulam Nabi Azad ,Home Minister Shiv Raj Patil and State Agriculture Minister Ab.Aziz Zager during the first anniversary of those who were killed in the earthquakearth at Tangdar near LOC in north of Srinagar on 08 Oct 2006. Chief Minister J