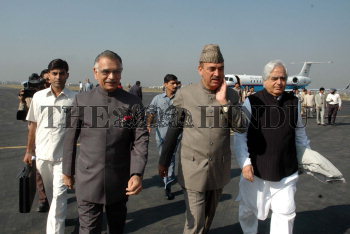 Caption : ( R to L)Suresh Kashwani Chairman minority Commission, Jammu and Kashmir Chief Minister Gulam Nabi Azad ,Home Minister Shiv Raj Patil , MLA Tangdar Kafil-ul-Rahman during the first anniversary of those who were killed in the earthquakke at Tangdar near LOC in north of Srinagar on 08 October 8, 2006. Chief Minister J