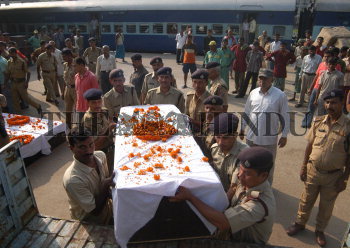 Caption : Dead bodies of the Railway Protection Special Force (RPSF) personnel being sent to their respective family members after according a guard of honour at Guwahati railway station on October 07, 2006. Seven RPSF personnel, one railway engineer and three others were killed in an ambush laid by the Dima Halam Daogah (DHD) Black Widow militant group in Lumding area, about 320 km away from Guwahati on October 06, 2006. Photo: Ritu Raj Konwar