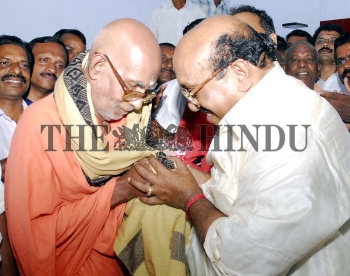 Caption : Swami Prakasananda, the new president of the Sree Narayana Dharma Sangham Trust being congratulated by the SNDP Yogam general secretary, Vellapally Natesan after the installation ceremony held in the Sivagiri Matom on October 6, 2006. Photo:S.Mahinsha