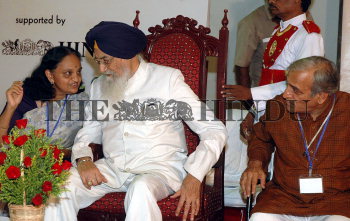 Caption : R Thara (left) Director, SCARF having a word with Surjit Singh Barnala (centre) Governor of Tamil Nadu at the inauguration of 'Frame of Mind' an international film festival on Mental Health organised by SCARF in Chennai October 6, 2006. Chairperson of the Film Festival Mohan Agashe (right) looks on. Photo: K_V_Srinivasan