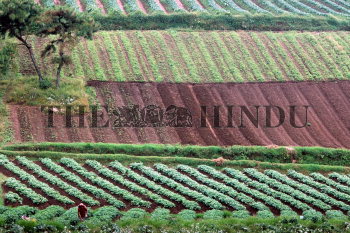 Caption : Vegetables grown in the hills of Shillong capital of Meghalaya on October 06, 2006. Nearly 10% of the total geographical area of Meghalaya is under cultivation. Agriculture in the state is characterized by limited use of modern techniques and low productivity. As a result, despite the vast majority of the population engaged in agriculture, the contribution of agricultural production to the stateâs GDP is low and most of the population engaged in agriculture remains poor. Climatic conditions in Meghalaya also permit a large variety of horticulture crops including fruits, vegetables, flowers, spices and medicinal plants. These are considered to be higher value crops but traditional values and food security concerns have prevented farmers at large from embracing these crops.The important fruits currently grown in the state include citrus fruits, pineapple, papaya, banana etc. The mandarin orange grown in Meghalaya is considered to be of very high quality. In addition to this, a large variety of vegetables are grown in the state including cauliflower, cabbage and radish. Photo: Ritu Raj Konwar 5-10-2006