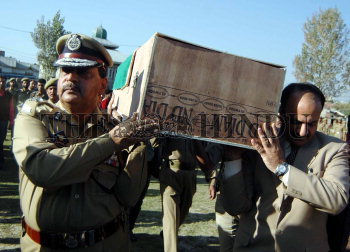 Caption : Jammu and Kashmir police chief Gopal Sharma carrying the coffin of one of his colleagues who were killed in a 22-hours long gunbattle in Srinagar on October 05, 2006. Two militants, two CRPF soliders, five Police personnel and one civilian were killed and dozens of security forces injured in the long gunbattle. Photo: Nissar Ahmad