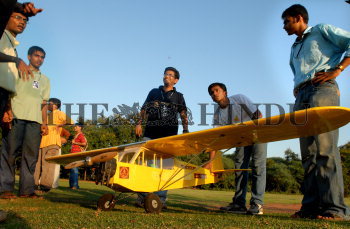 Caption : Fly to the success! : Students of IIT try to fly an aircraft controlled by a remote at the IIT stadium as part of the Shaastra 2006 . The engine Weighs 2 kgs, 3.3 horse power, 9000 rpm, 45 cc. , with balsa wood body. Controlled by a radio transmitter(remote) which transmits at 72.03 MHz. And a servo motor controlls the Ailerons,flaps, elevator rudder and engine throttle. 1 litre fuel tank filled petrol lasts for 40 min of non stop flight at high throttle. . Shaju John