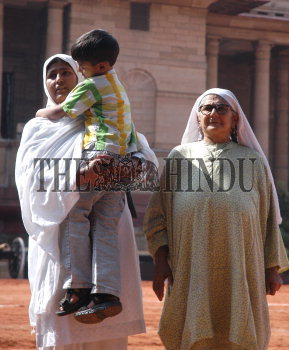 Caption : NEW DELHI: Family members of Mohammad Afzal who is facing execution for attack on Parliament, (from left) wife Tabassum, son Ghalib and mother Ayesha Begum, standing outside the Rashtrapati Bhawan after meeting the President, in New Delhi on October 05, 2006. Photo: V. Sudershan