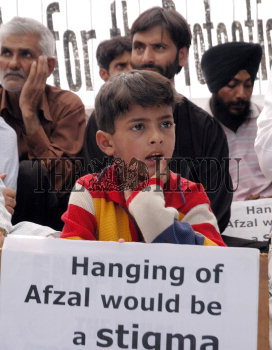 Caption : NEW DELHI: Ghalib, son of Afzal Guru who is due to be executed this month for his role in the 2001 militant attack on the Parliament, sitting on a dharna in support of his father's case in New Delhi on October 04, 2006. Photo: S. Subramanium