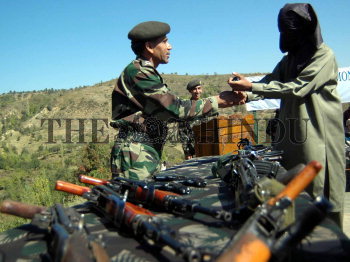 Caption : Kashmiri militants with faces covered for fear of reprisal from other militants,forming part of a group of 21 men who surrendered before Army troops at Baramullah, some 55 kms north of Srinagar on October 04, 2006. Photo: Nissar Ahmad