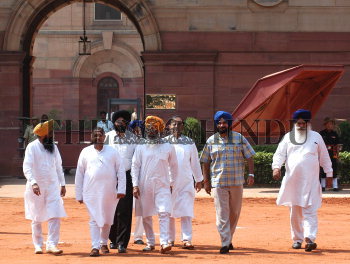 Caption : NEW DELHI: Bharatiya Janata Party members led by Arun Jaitley (third from right), and Shiromani Akali Dal members led by Sukhdev Singh Dhindsa (fourth from left ), coming out from Rashtrapati Bhavan, after submitting a memorandum to the President ,drawing his attention to 'the dangerous and continued neglect of the State farmers both by the national policy makers and the State Government'. The two parties also sought presidential intervention to get a CBI probe ordered into the Rs. 2100 crore corruption scam in the Ludhiana City Centre Project in which the State Chief Minister, Captain Amarinder Singh is 'the principal accused', in New Delhi on October 04, 2006. Photo: Shanker Chakravarty