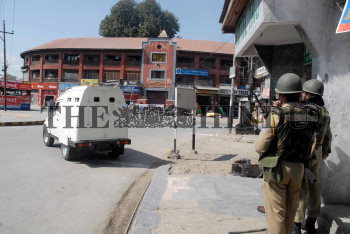 Caption : Jammu and Kashmir police and Central Reserve Police Force soliders taking positions during an encounter with suspected militants who made an attack at Lal Chowk in Srinagar on October 04, 2006. The militants opened fire on the base in the central market, wounding one civilian, police said. Photo: Nissar Ahmad