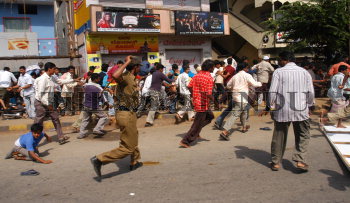 Caption : BANGALORE: Police clearing the mob who were creating trouble and involved in stopping the BMTC buses and other vehicles at Nayandanahalli on Mysore road during Karnataka bandh, in Bangalore on October 04, 2006. Photo: K. Murali Kumar