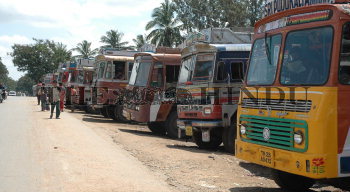 Caption : Due to Karnataka bandh, Lorries were off the roads in Bangalore on October, 04, 2006. A scene of parked heavy vehicles at Madavara on Tumkur Road. The bandh was called by Kannada organisations. Photo: G.P. Sampath Kumar