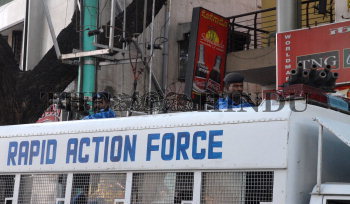 Caption : Karnataka bandh called by Kannada organisations was total in Bangalore on October 04, 2006. RAF were placed in sensitive areas like this one at Rajajinagar Navarang Circle in Bangalore. Photo: K. Gopinathan