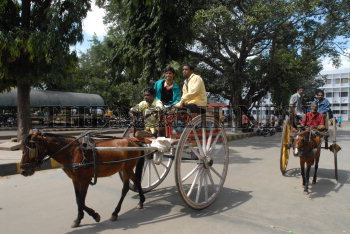 Caption : Back to cart days! Karnataka bandh called by Kannada organisation was total in Bangalore on October 04, 2006. Railway commuters take to horse carts as there were no autorickshaws and not required number of buses in Bangalore. Photo: K. Gopinathan