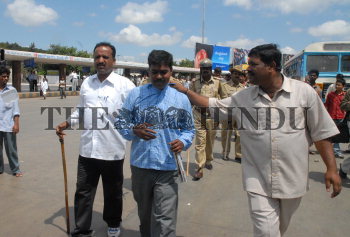 Caption : Karnataka bandh called by Kannada organisation is total. BMTC commuters are seen stranded following the skeleton bus services on October 04, 2006. Here a commuter, who is allegedly tried to instigate the public, being taken into police custody. Photo: K. Gopinathan