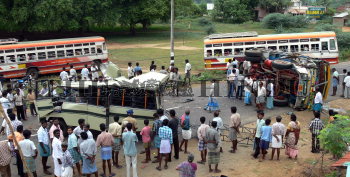 Caption : KANCHEEPURAM: Traffic on the Kancheepuram-Chingleput Road is blocked due to a head-on collision between a van and an empty sand lorry, at Thimmarajanpet, near Kancheepuram on October 03, 2006. Both the damaged van and lorry are lying in the middle of the road. Photo: D. Gopalakrishnan