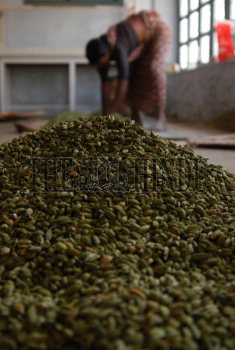 Caption : A woman worker grading cardamom at a godown in Kerala. Cardamom output this season is likely to decline owing to replantation of senile cardamom plants with 'Njallani', a high yielding variety, in Kerala's Idukki district, where cardamom is mainly cultivated in the state. Kerala had topped in cardamom production with an ouput of 9,765 tonnes registering an increase of 13.3 per cent in 2005-06. Tamilnadu also increased its production by 8.7 per cent to 1000 tonnes while Karnataka declined by 5.5 per cent to 1,775 tonnes. Photo: K.K. Mustafah 3/10/06