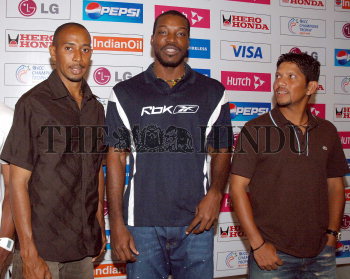 Caption : The West Indian players (from left to right) Ian Bradshaw, Chris Gayle and Ramnaresh Sarwan interact with media session in New Delhi on October 02, 2006. The West Indies cricket team arrived to take part in the ICC Champions Trophy 2006 being held in India from October 07 to November 05. Photo: S. Subramanium