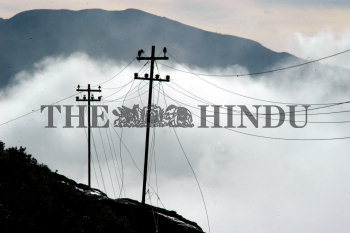 Caption : Electric posts from the backdrop against a picturesque scene at a hill Station in Kerala. The countryās gross domestic product (GDP)growth of 8.9 per cent in the first quarter of current fiscal, most of the sector registered a growth except electricity which grew only by 5.4 per cent compared to 7.4 per cent last year. Photo: K.K. Mustafah 2/10/06