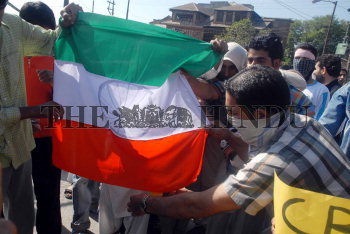 Caption : Kashmiri protestors burning the Indian Flag during a demonstration in in Srinagar on September 29, 2006. The demonstrators had protested against the proposed execution of the mastermind behind the 2001 Parliament attack. Mohammed Afzal. Photo: Nissar Ahmad