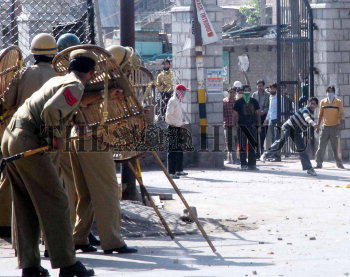 Caption : Kashmiri protesters and police throw stones at one another during a demonstration in Srinagar on September 29, 2006. Police on swung bamboo sticks and fired tear gas at dozens of rock-throwing demonstrators as the protests continued for the third day in Kashmir against the upcoming execution of a Kashmiri man Mohammed Afzal convicted of plotting a 2001 terror attack on Parliament House in New Delhi. Photo: Nissar Ahmed