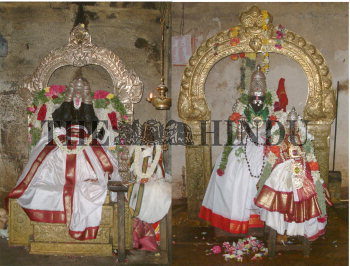 Caption : Idols of Lord Brahma and Goddess Saraswathi are found together at Sri Uthamarkovil Temple in Tiruchi. Very few temples have a shrine dedicated to Goddess Saraswathi. Sri Bikshandarkovil, known as Sri Uthamarkovil, near Tiruchi, has a unique idol of the Goddess. The idol is rare in many ways. Firstly, Goddess Saraswathi is present along with Her consort, Brahma - a special feature unique to this temple. Both Goddess Saraswathi and Lord Brahma have been set up facing south, justifying the christening of the deity as 'Sri Gnana Saraswathi'. Another special form in support of the nomenclature is that the goddess does not have a 'veena', the musical instrument associated with Her legend. Instead, the deity's left hand has a manuscript and the right hand, a 'Akshara manimaalai'. Abhayahastham and vadhahastham are the other features of Saraswathi's form here. Photo: R.M. Rajarathinam 29-9-2006