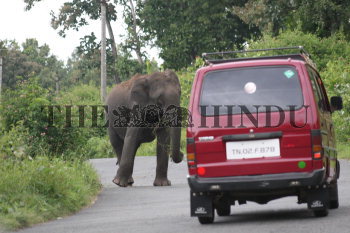 Caption : An elephant waiting to cross the Ooty-Mysore Highway which cuts through the Mudumalai Sancturay in the Nilgiris. Man-animal conflicts have become common after several migratory routes were encroached. Photo: K. Ananthan 25/09/2006