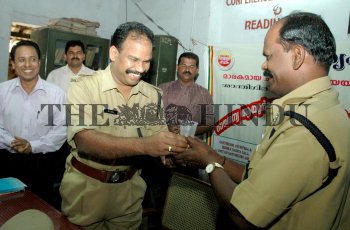 Caption : KOCHI: K.I. Bhaskaran, Deputy Commandant, Armed Reserve Camp, recieving the first dose of medicine distributed at the free Ayurveda camp against Chikungunya for City Police personnel from P. Vijayan, City Police Commissioner in Kochi on September 29, 2006. The camp was organised jointly by Santhigiri Ayurveda Clinic and Nanma, a voluntary organisation. Medicines were given to 400-odd policemen at the camp. Photo: Vipin Chandran