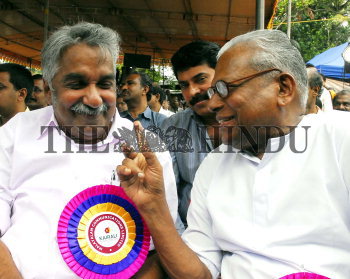 Caption : Chief Minister, V. S. Achuthanandan and Leader of the Opposition, Oommen Chandy share a joke at the function marking the foundation laying of a building to house the headquarters of Kairali Television Channel in Thiruvananthapuram on September 29, 2006.The channel's chairman and film actor, Mammootty is also seen in the picture. Photo: S. Mahinsha