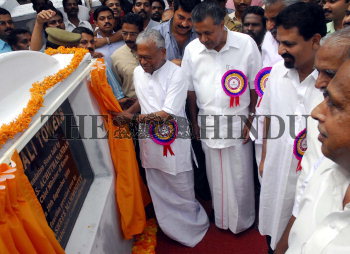 Caption : Chief Minister, V. S. Achuthanandan, unveils a plaque marking the foundation laying of 'Kairali Towers,' the building where the CPI(M)-controlled Kairali Television Channel will have its headquarters in Thiruvananthapuram on September 29, 2006. Chairman of the channel, Mammooty, CPI(M) State Secretary, Pinarayi Vijayan and Leader of the Opposition, Oommen Chandy are also seen in the picture. Photo: S. Mahinsha