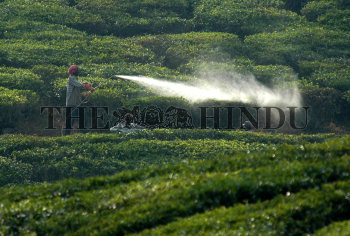 Caption : A worker spraying pesticide at a tea plantation near Devikulam in Idukki district in Kerala. The UPASI Tea Research Foundation (TRF) has commenced a survey to monitor the levels of PESTICIDES residue in tea and would cover at least 50 per cent of the factories in each plantation district in the southern region of the country. The survey is intended to ensure adoption of safe practices in the usage of plant protection chemicals in estates, that no trade barriers came to tea on account of PESTICIDES residues and also monitoring the logistics of developing standards for residue contents of various PESTICIDES now being used on tea in India. Photo: K. K. Mustafah 29/09/2006